From Meta Wiki
Jump to navigation Jump to search 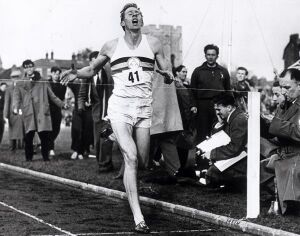 The platonic ideal of Sub4.

Sub4 is the name I just made up for a project that aims to get the parse time of all pages on the RuneScape wikis below 4 seconds.

We've done a pretty good job caching pageviews via Cloudflare (and the parser cache generally helps a lot too). But because of daily Grand Exchange updates invalidating all the caches, there's a pretty hard lower bound on the number of pages we need to generate from scratch every day. A large percentage of those happen immediately after GEBot runs, which leads to very spiky (read: unstable and expensive) resource utilization, and also unexpectedly slow load times for "randomly selected" users. It's maybe a bit counterintuitive, but because a page can't be cached until it's been parsed, the total resource utilization for certain popular, slow pages (Money making guide) actually grows quadratically with the parse time.

We can't really prevent this spikiness at some level (short of insane suggestions about moving most of the GE stuff outside the MediaWiki layer). It's just a limitation of us being RuneScape, that most other wikis don't need to deal with. But what we do have control over is how long each of those pages take to load.

There's a bunch of techniques we can use to make things faster, a lot of which are actually pretty easy. This improves things for everyone and probably gives us more money to waste at wikifest.

How do I see how long a page takes to load?[edit | edit source] 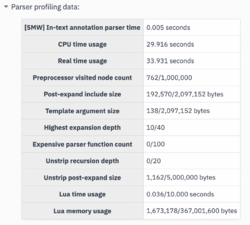 Just refresh the page and count the seconds. Duh!

No, okay, really what you want to do is click "edit", and then preview the page. If you scroll down to the bottom and click "Parser profiling data", there'll be a box that has a field called "Real time usage". That's how long it took.

The "CPU time usage" is also useful for tracking how much of the time was the actual server thrashing, rather than waiting for a result, although I've found it to be somewhat unreliable (for example, calling out certain waiting-time as the CPU's fault when really it was I/O-related).

How pages get generated[edit | edit source]

(Note: this is a simplified version of my own understanding. Please don't read this if you actually know how MediaWiki works!)

We have multiple layers of caching, which means that most pageviews never need to hit the database to generate content, or run DPL/SMW. But those caches get invalidated if someone edits a page, or a price changes.

When that happens, the page needs to get regenerated from the revision text in the database. The MediaWiki parser reads that text, figures out which templates/modules/etc and such are used, loads those revisions from the database, and repeats the process until all the dependencies are known. Then it does a full parse on all of this content, which often involves more reads (to figure out what color links should be, how to size images, any DPL/SMW, etc).

A page parse for an average article can often be 500 or more total database reads (big pages can be way more!). MediaWiki does synchronous database I/O (i.e. if you need to iterate over a list of things and do a query for each of those, they will happen one at a time). When the response time from the database might be around a millisecond (pretty much regardless of the actual query complexity), this time where we're waiting for a DB response often adds up to a majority of the total parse time.

This is a really important takeaway: In my experience with RuneScape, page parsing time is usually dominated by waiting for database I/O, rather than anything related to the CPU usage of the parser.

Here's a few things everyone could help with:

Here's a few things we should do as a network, but are hard for a single person to help with on-wiki:

Generally the best technique for finding things to speed up, is to profile page loads on a dev wiki. There is a MediaWiki profile tool that gives a pretty decent overview the timing of each method call. I can also generate a list of the worst-offending pages, if that would be useful to folks. Let me know.

Things you could help with, and/or ongoing projects[edit | edit source]

Ordered roughly from easiest to hardest.

Add ur signature if u gotta go fast. Talk to me on Discord (Cook#2222) if you want to know more.