There's contention on their inclusion, whether it be the wiki logos or other emoji; some seem to like them, some don't mind, some dislike them. Do you think we should implement them, and if so, what icon should be used and what roles should have them?

No icon – With already having dedicated role colours, I don't believe that the icons serve any meaningful purpose for distinguishing between different users (particularly admins) and just adds to visual clutter. I'd be less opposed to icons that are smaller and more simplistic (example from Totus server); while the wiki logos are thematic, they don't quite fit that role. Even then, I'd be at most neutral. --laagone talk 07:44, 28 September 2021 (UTC)

Extreme neutral - I don't mind either way. I know some people really don't like having all the extra Discord features enabled because of clutter; at the same time some people like being able to customise things and are enjoying using the icons to have fun/mess around. I'd suggest leaving them enabled for now so people can try them out and see if they think there's any reason to use them long term once the novelty wears off. I doubt there's going to be a very meaningful use for them other than for fun and I don't feel strongly about whether we keep them or not. IsobelJ (talk) 21:37, 28 September 2021 (UTC) 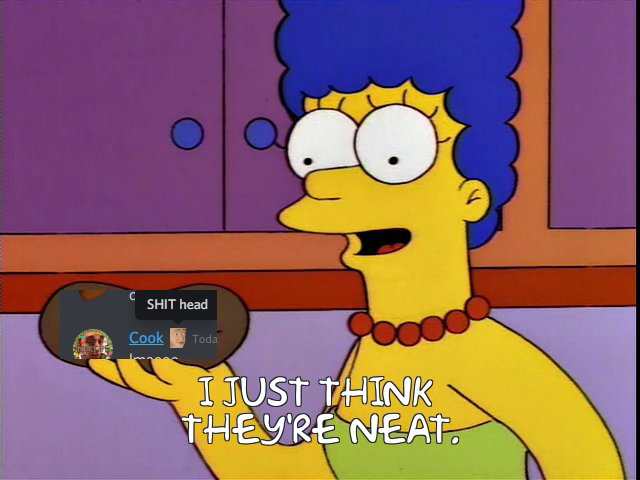 Neutral - I have no strong feelings, one way or the other. FjaraTalk

Comment - What no one has even thought of is removing role colours and having icons replace them, like a PMod/JMod Crown. I think it's a bad idea but it's the only way I'd be okay with having them; Oppose otherwise. Elaine (talk) 22:46, 28 September 2021 (UTC)

No icons - If they were left aligned, maybe they'd look alright, but they're not.

How so? There's not any roles for icons to be on that incentivise editing.

Not yet. We can give roles/icons based on non-userspace edits to encourage people to edit. Skmilar system we implemented for the Clan. We've definitely seen an uptick in accounts created and linked. Haidro (talk) 00:43, 29 September 2021 (UTC)

Thanks for clarifying, so icons won't actually incentivise anybody to edit, and you're supporting based on a theoretical future proposal you'll potentially be making. I feel like you should bring up icons in that proposal when or if it ever happens.

I'm a bit disappointed you're not willing to try new things for the benefit of the Wiki and letting your personal preferences over a small graphic get in the way. Haidro (talk) 06:03, 29 September 2021 (UTC)

No - I may be willing to change my mind under three conditions, two of which are within our control: role colors are removed, use symbols that aren't actively used/memey emotes (a la ilove[emote]), and the symbols come before user names. The last one is obviously one that falls on Discord to sort out their dumpster fire. Badassiel 23:59, 28 September 2021 (UTC)

Eh - Support icons, but only on optional roles. None of the colored roles should have icons, but I wouldn't care if people wanna be silly with optional ones. You are never attaching a facebook emoji to my name. -Towelcat (talk) 01:35, 29 September 2021 (UTC)

Comment - If we do anything, I'd like it to be something that makes sense and doesn't look out of place. At least for the "main roles". Example: 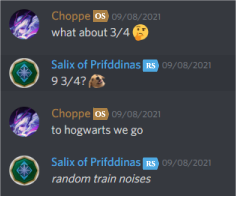 Please no I just really don't like the clutter, it's really annoying when everyone has the same emoji and for some reason there are admins on the discord that just can't help themselves and are constantly messing with them.... Mejrs (talk) 22:07, 30 September 2021 (UTC)

Support icons in some cases - I'd be fine trying something out like Haidro said, at least temporarily to see if it actually has an effect. I think overall for OS the ranks in the cc haven't driven people to edit very often, but I'm not sure if that's because it's exclusive to ingame chat, where few core editors generally hang out. I'd like to see a proposal for something like that in the future. - Andmcadams (talk) 22:24, 30 September 2021 (UTC)

No icons - the extra icons distract from conversations, and they can't be disabled for people who don't want to see them. I don't realistically see this as an incentive that brings in new editors. Riblet15 (talk) 20:11, 5 October 2021 (UTC)

Support - i really like the custom role icons, and hope that they get a more permanent spot in the discord. if implemented well, they could add a unique touch to the server. i noticed some complaints about the icons being on the right of the name, and they can be moved to the left quite easily using some custom css via a third party client.

this is just a quick mockup i made, showing a simple icon on the left and right of the name, and i really believe that with somebody who cares about making them look nice, they can be turned into something a majority of people like. Tethys (talk) 00:38, 6 October 2021 (UTC)

As a note, from Discord's Twitter post here "All 3rd party apps or client modifiers are against our ToS, and the use of them can result in your account being disabled. I don't recommend using them." So that will not be a viable option unfortunately. FjaraTalk

No icons - I don't really like that the emoji attached to my name is out of my control and I don't see them bringing much value. Not necessarily opposed to icons for edits per Haidro if a subsequent proposal is created, but I would want that to be opt-in and not just automatic via Gaz Bot for those that have their account linked. Christine 01:01, 6 October 2021 (UTC)

Comment - I dont really have a preference personally, but a functional use case for role icons would be optional RS and OS roles that adds a RS/OS icon like the one in Merds' example, so you can show your "preferred" game version in your name. Having role icons for people with roles seems a bit redundant with the role colours currently, so having a role icon for another purpose would seem logical. Juha686 (talk) 19:58, 11 October 2021 (UTC)