yadda yadda we've been through this FOUR times now [1] [2] [3] [4] scroll bug has been fixed well enough (currently selected channel goes to the bottom of the viewport on the channel list) is it time for a banner already??????

Clarification for those who haven't kept up[edit source]

In the first thread it was brought up that the mobile interface had a bug in it that would reset the scroll of the channel list to the top every time you switched away from the server and back in, which caused the banner to always show first and push the channel list down. This has now been fixed, and the viewport resets such that the channel you are currently in (or were in when you changed servers), is at the bottom of the visible channel list. It's not a complete fix to the problem, granted, but it at least makes it so that the banner isn't constantly the first thing you see and you actually stay in the channel list if you're further down.

In the third thread riblet brought up a bug? Annoying feature? Whatever it is related to the banner, which makes it scroll in first before scrolling the channel list. This was already fixed by the time the fourth and last thread was made, as in the "new" React Native client, the banner is always glued to the top of the channel list rather than being a loose element that scrolls in first.

Due to these fixes on Discord's part I believe that there are no more bugs that have a significant impact on the decision making process about whether or not to include a banner in the Discord server, hopefully steering this forum thread to be a discussion purely about the banner itself.

Edited with clarification because it makes sense for it to be here. InvalidCards (talk) 11:09, 7 December 2022 (UTC)

Support - From the details outlined here, it seems that there should be no issues with adding a banner! Besides, I reckon it'll look rather decent on the server :D AppleRank (talk) 11:16, 7 December 2022 (UTC)

Oppose - This is still a functional change for users that uses up vertical space which is extremely limited, pushing down other useful channels for no practical reason. Pinning the current selected channel to the bottom doesn't really fix that, it still pushes down other channels if the channel selected is high up on the list. I also just don't like banners because they look like dogshit.

Support the banner that was in this thread. But if there is no consensus for a banner after this thread, then I also support not talking about this again for at least 6 months 🙃 jayden 12:22, 7 December 2022 (UTC)

Comment - I'm indifferent about this issue. I'm only here because I like to type things peepoTalk. FjaraTalk

Soft Neutral - While I agree it's somewhat of a waste of space it would be interesting to use it for unconventional reasons like events. Might I suggest a meta UoTM and plaster their face directly into the banner slot. 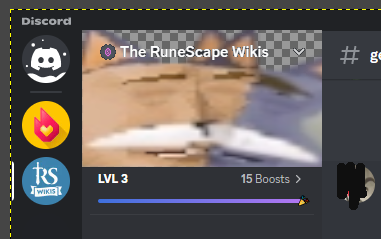 now Angry Support - That's it I've had it! I'm tired of these gaslighting threads denying our banner-having status! The old wiki was better that's right I said it! We had banners with all sorts of things like cars and free gold and this runescape wikipedia can't achieve it! Mobile users go get a longer phone! I personally use three vertical monitors and im SICK and TIRED of not having a representative image at the top of my IRC-inspired chat app! Literally shaking. User:Undefined talk 07:55, 4 January 2023 (UTC)

Oppose - As before, the banner is for some a subjective aesthetic improvement and to others a navigation obstacle with no opt-out. In place of a permanent banner, I'd still like to see us try the banner as a temporary sitenotice for OSWF or other short-term wiki projects. If there's a good candidate project that could use some additional hands, it might make sense to propose something in #meta-discussion to see if there's generally consensus to add it for a couple days, or if if a full thread would be necessary. We should do this in place of a permanent banner, which effectively guarantees banner blindness after the first day. Riblet15 (talk) 22:08, 8 December 2022 (UTC)

Yea I support this. We'd actually be taking advantage of the banner. How do we agree on what can be a banner and what shouldn't be? Perhaps we could treat it the same way we treat the sitenotice Haidro (talk) 00:15, 6 January 2023 (UTC)

Oppose unless if and only unless we use funny pictures and change it frequently to annoy everyone. -Towelcat (talk) 09:01, 16 December 2022 (UTC)

Support Riblet - I do like the idea of using it as something that can bring attention to a major thing that the wiki is doing, or maybe to a major update to either of the games (perhaps some duality if both release a major update at the same time). A permanent all the time banner would be fine cuz I don't really care about vertical space, but I understand that some people just can't be bothered to scroll. Badassiel 04:24, 8 January 2023 (UTC)

Oppose (but might be okay with Riblet's suggestion) - Not in love with the banner in a general sense, but I could see the value in using it occasionally for projects and whatnot that we want to highlight. I think if we do decide to use it in that manner, we shouldn't require a new forum thread each time we want to add/remove/change the header, as that might defeat the purpose especially if the project in question is time-sensitive. BigDiesel2m (talk) 05:24, 8 January 2023 (UTC)